The main goal of this document is to create a proposal for a new set of Process & Task Runtime oriented APIs. This APIs will be provided as separate maven modules from the activiti-engine module, where the interfaces defined in the APIs will be implemented. The main purpose for this new API is to make sure that the path to the cloud approach is smoother, allowing implementations to start by consuming the framework and then move smoothly to a distributed approach. As mentioned by Martin Fowler in his blog post Monolith First, https://martinfowler.com/bliki/MonolithFirst.html we are going through an evolution to better isolation to support scalable and resilient architectures. The API proposed here are consistent with modern development approaches, compact and making sure that the transition to a microservice approach is faster and conceptually more aligned.

Until now, the Activiti Process Engine was bundled as a single JAR file containing all the services and configurations required for the engine to work. This approach pushes users to adopt all or nothing. Inside this JAR file there are interfaces and implementations which are tightly coupled with the Process Engine internals. This causes maintenance and extension problems of different implementers not understanding where the public API ends and where the internals begin. This also blocks the Activiti team to move forward and refactor the internals into a more modular approach.

It is really important to notice that the old APIs will not be removed, but the new APIs will be always the recommended and maintained approach for backward compatibility.

It is also important to note that Process Runtimes provides you the granularity to be scaled them independently. In contrast with the notion of Process Engine, where you never know the nature of the Processes that you will have in there and hence testing, validating and defining scalability requirements becomes a painful (if not an impossible) task.

One more important difference between the old notion of Process Engine and Process Runtimes is the data consumption aspect. Process Runtimes are designed to execute Processes. Task Runtimes are designed to execute Tasks. Process & Task runtimes are not designed for efficient querying, data aggregation or retrieval. For that reason the Runtime APIs will be focused on compactness and the execution side. Following the CQRS pattern (Command/Query Responsibility Segregation, https://martinfowler.com/bliki/CQRS.html ) the Runtime APIs are focused on the command (execution) side. There will be another set of APIs for efficient querying and data fetching provided outside of the scope of the Runtime APIs. Check the Activiti Cloud Query Service for more insights about these APIs.

While creating the proposal, we have the following architectural diagram in mind. You can consider this as the ultimate objective from an architectural and APIs point of view:

The separations of concerns between Tasks and Processes at the API level will be kept in separate packages. Providing an activiti-process-runtime-api and a activiti-task-runtime-api. These packages will represent our Backward Compatibility Layer with clear deprecation and evolution policies. 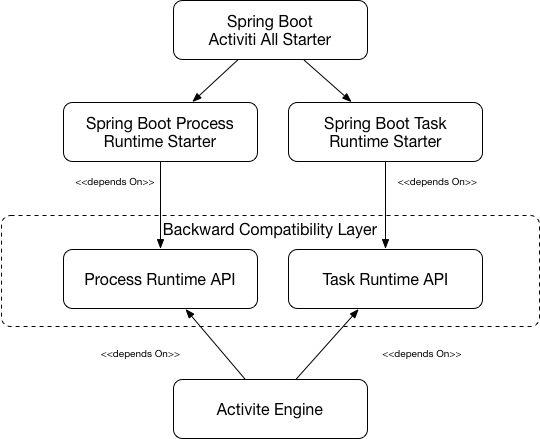 For Spring Boot users the Spring Boot Starters will provide all the configuration and wiring needed for quickly get a ProcessRuntime and a TaskRuntime up and running.

Configuration wise the following types will be autowired (following standard spring practices: aka autoconfigurations) for you while creating the ProcessRuntime instance:

This autoconfigurations should match the available metadata from our process definitions to make sure that our processes has everything required to run.

Then you should be able to do:

With the new processRuntime instance you can access to the available processDefinitions:

Notice that there are is no way to change this list of ProcessDefinitions. It is an immutable list.

You can get the configurations used to construct this ProcessRuntime by doing:

Here you can check which connectors and event listeners are currently registered to your runtime. In particular, getting connectors informations is a key improvement over previous versions:

This allows Process Runtimes to validate at creation time, that all the Process Definitions loaded can be executed, because all the connectors required are present.

In a Spring context, all connectors and listeners will be scanned from the classpath and make available to the Process Runtime at creation time.

To create process instances it should be as simple as selecting the Process Definition and creating new instances with our fluent API:

Task Runtime should follow the same approach as Process Runtime:

The initial version of these APIs will be restricted to the minimal amount of operations to cover most use cases. Are you using Activiti 5 or 6 APIs? We will appreciate community feedback on what other features not mentioned here are you using in your projects?

Other Considerations and References

Reasons to introduce a new set of APIs:

PoC in Incubator (to track the progress)

This site uses Akismet to reduce spam. Learn how your comment data is processed.